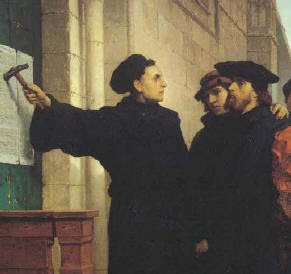 This Reformation Day… We took the Gloves off. Yeah, I went off a bit. The reason? Because it’s becoming apparent to me that, as much as I would like to say in unison with everyone else in the LCMS, I don’t think we’re offering the right corrective to the kind of Christianity that is going on out there these days. It’s almost as if we’re trying to relive the first reformation and force everyone else to relive it with us.

Martin Luther had no idea that a “reformation” was on it’s way. He merely wanted to call a disputation on indulgences. That’s it. Nothing out of this world. But it got out of control for him. Called to revoke his teachings, to recant under pain of death, what cause the reformation wasn’t a group of people getting together to write a mission statement, assess assets and crunch numbers. And before any of you in the LCMS think to yourselves, “yup, we get that”, think again. We’re so caught up in our own stupid fads that we’re nearly useless.